The Sirens Of Light

Origins…….In early 2004, Andy J. had the idea of making a Gothic Rock record…. but not just any Gothic Rock record…..a Classical Gothic Rock record – one that encapsulated everything that the Gothic music scene had evoked during its hay-day in the clubs and pubs of London in the 1980’s and 1990’s. By the early 2000’s that scene had all but disappeared, and there had been little new music released by any of the original bands for many years.

Concept…….Inspired largely by the lack of any classic Gothic music in the early 2000’s, the tipping point for the formation of the group was an unforgettable, accidental tour of the former East Germany that Andy J. and James P. Quinn were involved in. This experience, together with a love for dramatic, romantic, poetic music based in the darker side of the human condition, drove the original concept to make a Classical Gothic Rock album into what became ‘Nullus Margis Gothica’, the first Sirens Of Light album…….

Writing and Recording of Nullus Magis Gothica…….written and recorded in May 2004.It was recorded on location at Andy J’s family home in Suffolk U.K., on a portable all in one digital multitrack recorder, a drum machine Andy J. had since 1990, a multi effect guitar processor, the bass direct in to the recorder and two microphones, and mostly written during the recording process. The decision to work this way was based on the idea of keeping the record spontaneous and earthy and the atmosphere of the residence – a medieval barn church where many of the photographs for the original cover of the album were taken – which has a grand piano that was used on a couple of the tracks. Additional recording and mixing of the original album was completed at Earthworks Studios in London where the opening track of the album was recorded and a cover version of Jimi Hendrix’ Ezy Rider was added to the running order as a hidden track. 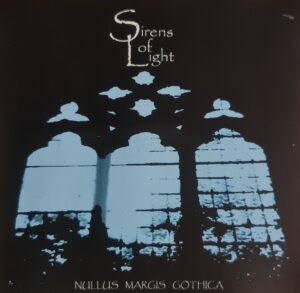 Initial Release and Aftermath…….after its completion, the album was released on Damage Recordings in 2005.
‘Nullus Margis Gothica’ (pictured above) was designed to be a ‘start to finish’ listening experience, to take the listener on a journey as well as each track being a stand alone piece. It had a very limited release due to both protagonists being called on to concentrate on other aspects of their careers. Only a small quantity of the initial pressing on compact disc went out through distribution and, therefore, the original version of the album has become almost impossible to acquire.

A Pandemic, a Website and a Chance Discovery…….fast forward to early 2021. Over the years since 2005,  Andy J. and James had  many conversations about the record and regretted that it never had the backing or the promotional input that it deserved. The idea of a rerelease had been discussed, but the original record had been mixed to sound like an original 80’s Goth record, a sound that perhaps was not relevant anymore on the current scene, especially with the advances in recording technology and the expectations of the listeners to be taken into consideration. A remix was also impossible because all the original multitrack recordings were long gone and the Pro Tools sessions the record was mixed from were also lost to time, studio moves and equipment changes. The possibility of rerecording the record in it’s entirety was discussed but dismissed as, due to the organic way the album was written and recorded, it would be almost impossible to reproduce the moment and it was feared that the original magick would be lost…….
In February 2021, while putting together the showreels for his producer website, completely by chance,  while searching through old hard drives found in a box of occult manuscripts, Andy J. discovered the aforementioned, thought lost, Pro Tools sessions, almost completely intact and functional……. 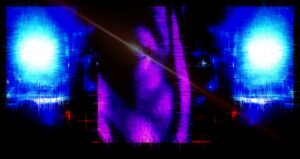 Rework, Remix, Remaster, ReRelease…….after the discovery of the lost sessions, the decision to re-mix the album was an easy one. In consideration of the speed at which it was originally written and recorded and the small amounts of missing material – one track had no drums for example – it was obvious that the best course of action was to rework the record to some extent to bring it up to a different level while using as much of the original recorded material as possible to keep the original atmosphere, edge and integrity of the original recordings.
The rework is being done in Andy J’s Studio, Damage Recordings and……. 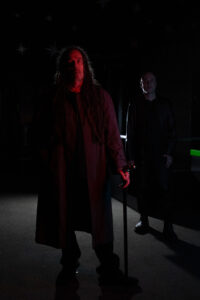